The strong horizontal gradients in sea surface temperature (SST) of the Atlantic Gulf Stream exert a detectable influence on extratropical cyclones propagating across the region. We show this in a recent paper in the journal of Climate Dynamics. In this article we conduct a sensitivity experiment where 24 winter storms taken from ERA-Interim are simulated with the regional model HARMONIE (at 10-km resolution). Each storm is simulated twice. First, using the observed SST pattern (REF). In the second simulation a smoothed SST is offered (SMTH), while lateral and upper-level boundary conditions are unmodified. In this we try to isolate the 'sole' effect of the changes in SST.


Each storm pair propagates approximately along the same track, however their intensities (as measured by maximal near-surface wind speed or 850-hPa relative vorticity) differ up to 25% either sign. A 30-member ensemble created for one of the storms shows that on a single-storm level the response is systematic rather than random. To explain the broad response in storm strength, we show that the SST-adjustment modifies two environmental parameters: surface latent heat flux (LHF) and low-level baroclinicity (B). LHF influences storms by modifying diabatic heating and boundary-layer processes such as vertical mixing. The position of each storm's track relative to the SST-front is important. South of the SST-front the smoothing leads to lower SST, reduced LHF and storms with generally weaker maximum near-surface winds. North of the SST-front the increased LHF tend to enhance the winds, but the accompanying changes in baroclinicity are not necessarily favourable. Together these mechanisms explain up to 80% of the variability in the near-surface maximal wind speed change. Because the mechanisms are less effective in explaining more dynamics-oriented indicators like 850hPa relative vorticity, we hypothesise that part of the wind-speed change is related to adjustment of the boundary-layer processes in response to the LHF and B changes.

Popular posts from this blog 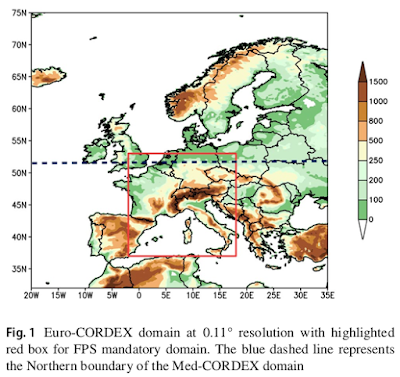 Climate simulations over Europe, at convection-permitting scale! Regional climate simulations are run at ever higher resolution, gradually reaching convection-permitting scales. Some years ago a number of research institutes have agreed to create a convection-permitting ensemble over Europe. Here you find the first paper that has come out of this collaborative endeavor. It discusses the setup of the project, and some first results. These include a description of the ensemble performance of three test cases. The abstract is given below. A first-of-its-kind multi-model convection permitting ensemble for investigating convective phenomena over Europe and the Mediterranean. Erika Coppola · Stefan Sobolowski et al (2018). https://doi.org/10.1007/s00382-018-4521-8 (Climate Dynamics, 2018) Contact me if you do not have access to the paper Fig. 2 Total precipitation during one of the events (from Coppola etal 2018) Abstract A recently launched project under the auspices of the W
Read more